« The truth lays at the bottom of the pot »

Exactly a year ago, on January 20th 2018, the great master of gastronomy drew his last. This is an opportunity for us to share with you a unique issue dealing with both food and wine, and to walk in the footsteps of the surprising “Monsieur Paul”.

I – The legendary Inn of Collonges-au-Mont-d’Or

Who here has never dreamt of entering this inn to sample its wines and savour its dishes? Indeed, as soon as you set foot in the establishment, the butler joins you and leads you to your table, winding through the rich and beautifully gilded furniture and walking you through all the style and delicacy of the 18th century.
Once you’re comfortably settled in, you are handed the elegant menu, or “carte”, which strikes you with the quality of the wines offered by the sommelier.
Among the many suggestions, you will find white wines, such as a prestige Pouilly-Fuissé – George Duboeuf, a Hermitage “Le Chevalier de Sterimberg” – Paul Jaboulet Aîné, or perhaps a Chassagne-Montrachet 1er cru « Les Caillerets » – Jean Marc Morey. 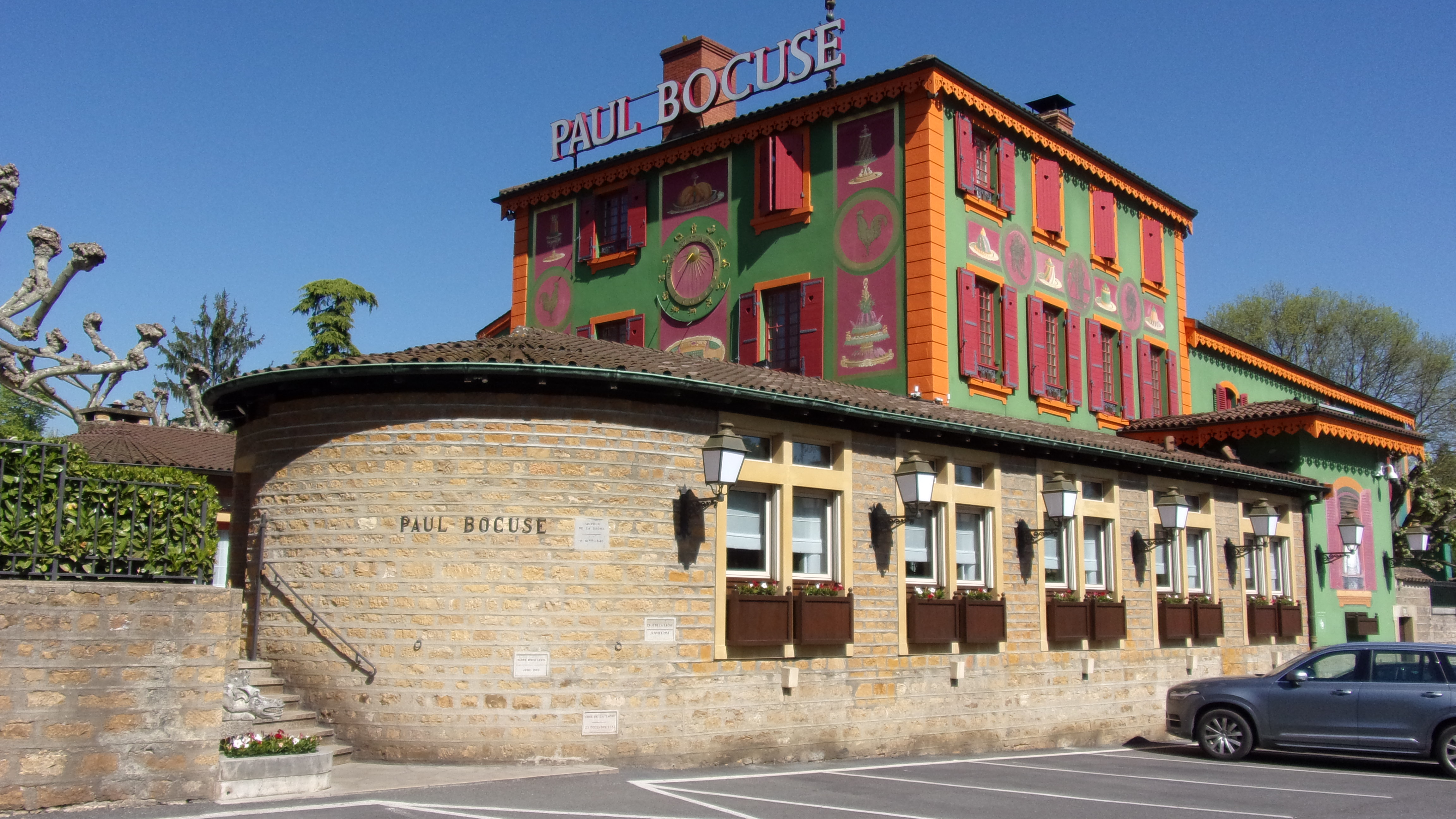 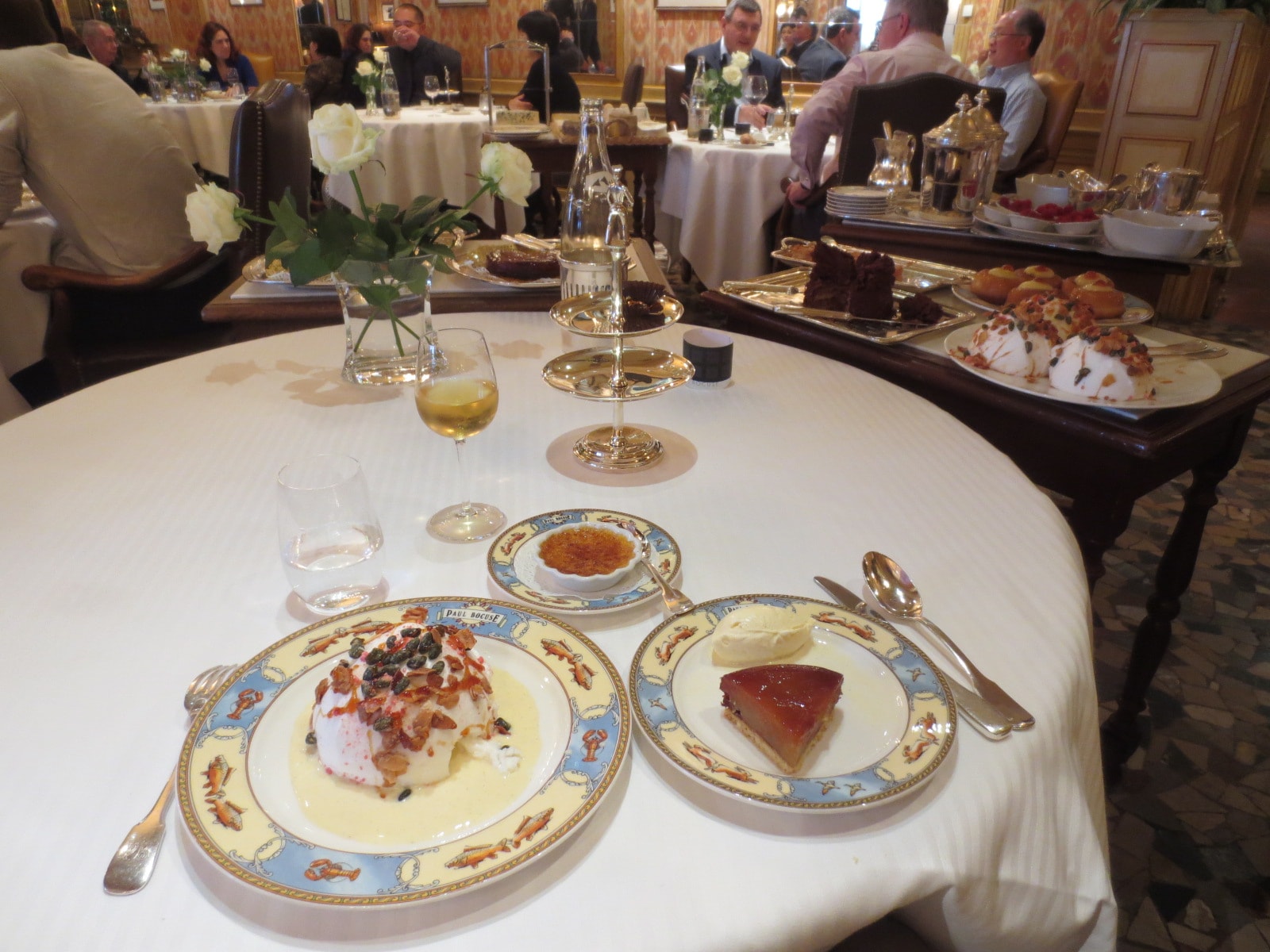 Alternatively, on the next page you can browse the red wine selection, in particular vintages from the côtes du Rhône such as a Côte-Rôtie-Clusel Roch, or un Cornas “Terres Brûlées” -Jean-Luc Colombo.
In addition, in the Pauillac appellation terroir located in the north of Bordeaux in Aquitaine, you will find a Pauillac Château Grand Puy – Lacoste-Grand cru classé.
Finally, you may also opt for sweet wines, such as a Gewürztraminer « Blason d’Alsace » Late Harvest – Léon Beyer, or perhaps a Hungarian wine: A Tokay Aszù 5 Puttonyos – Disznoko

Meanwhile your mouth is already watering at the though of what awaits you on the following page. Paul Bocuse’s cuisine promotes fresh and simple products, like the delectable Poultry from Bresse “Mere FIllioux”, served with Morel mushroom sauce and in-season vegetables. Before you get carried away however, you must begin by selecting an entrée such as a terrine of foie gras or the pan fried variation. If you are more into seafood, we highly recommend the marinated « Bømlo » salmon with its imperial caviar or the lobster “à la française”.

Perhaps you will be more intrigued by the famous VGE soup, which stands for Valéry Giscard d’Estaing. This black truffle soup was crafted for the French president in 1975.

And finally, the coup de grace, you will be presented with a cheese trolley and a selection of desserts to conclude your intensely flavoured journey through a masters take on French cuisine. Up until last year, Paul Bocuse himself would stroll among the tables and ensure all his patrons were enjoying their meal.

« Monsieur Paul », also referred to as the chef of the century, will continue to fascinate the world with his cuisine, both refined and traditional and yet original by its simplicity.

The master of gastronomy summarised his art as follows “There is no such thing as great or poor cuisine, there is only good cuisine”. In several interviews he insisted on the importance of cooking with freshly picked and harvested ingredients. This very authentic cuisine has spoken for the French culinary culture way beyond its national borders, as Bocuse eventually became the most famous chef on earth. He was the first to step out of the kitchen in order to give time to the press, and appear with his unique charisma on screens throughout the world.

He would never hesitate, however, to remind his chefs that the time has come to hurry back to their stoves.  Both humble and generous, “Monsieur Paul” represents the excellence to which the region of Lyon owes its renown. We will now take a closer look at the path he followed to reach this goal of a lifetime.

II – A calling for gastronomy

Paul Bocuse was born in his family Inn near Lyon, in Collonges-au-Mont-d’Or, on February 11th 1926. As he grows up in this environment, he develops strong ties to his region and takes solid roots in his homeland. Indeed, although Bocuse has travelled quite a bit throughout the world, he ended up gladly remaining in his dear Inn. It is there in fact that, exactly a year ago, the great man expired.
How did his passion for gastronomy begin then? Some would say it was written in his DNA. Bocuse was descended from a long line of inn keepers and wine makers. The family’s very first restaurant opened in 1853. The first owner of the family inn was his grandfather, Joseph Bocuse (1869-1942). 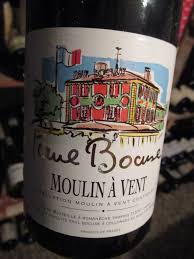 However, during the second world war, the young Paul had less concern for cooking and inn-keeping as he enrolled in the French army of Liberation in 1944, under the General de Gaulle. He was part of the first free division of Frenchmen, with which he took part in several battles until he was injured in Alsace and nursed back to health by American soldiers. These soldiers took this opportunity to tattoo a French rooster on his left shoulder, a tattoo which he will proudly wear during his entire life. His involvement in the war effort against Nazi Germany earned him the Croix de Guerre 1939-45. 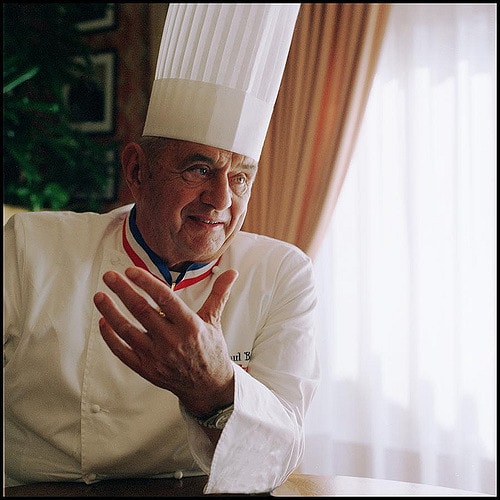 After the war in 1946, Paul Bocuse decides to take up his passion once again. He learns the basics and more with a leading figure of Lyon’s cuisine: The Mère (meaning mother) Brazier. If you’d like to know a little more about the context and the story of Lyon’s “mothers”, have a read on our website where you can find our article on Lyon, capital of the gastronomy.
From the years spent in the traditional “bouchons” (restaurants of Lyon), Bocuse receives all the regional heritage he will strive to honour in his cooking for years to come.
A few years later, Paul Bocuse receives valuable training from another key figure of the food scene in Lyon: Ferdinand Point, under whom he will work eight years. Point was the first chef to receive three stars with the Michelin Guide in 1933. He is widely recognised as one of the founding fathers of “new cuisine”.
Confident with the training and experience he has received under the Mere Brazier and Ferdinand Point, Paul Bocuse then decides to go back to Collonges-au-Mont-d’Or. With his fathers help, he takes over the family Inn, which soon earns its first Michelin star. The following year he loses his father, and becomes the true Paul Bocuse.

IV – A meteoric rise to the pinnacleof culinary success

Our man’s destiny took a crucial turn in 1961. It is the year he is given the award and title of “Meilleur ouvrier de France”, meaning best artisan/worker of the country. For a young chef, this prestigious title represents lasting excellence. The president Charles de Gaulle watches as “monsieur Paul” is decorated with the medal of honour at the Sorbonne.

By now the die is cast, and Paul Bocuse is an essential figure of French gastronomy. As such, he receives honours from the French republic in 1975 and the president Valéry Giscard d’Estaing makes him a Knight of the Legion d’Honneur. A lavish reception is pulled together for the occasion, and the freshly knighted Bocuse is in charge of the meal. It is for this occasion that he created his « VGE » soup mentioned above.
The flow of acknowledgements and awards is never ending as Monsieur Paul is decorated again in 1987, by prime minister Jacques Chirac this time, Officer of the Legion d’Honneur. Last but not least, he is made Commandor of the Legion d’Honneur in 2004 by prime minister Jean Pierre Raffarin.

The Paul Bocuse empire lives on from this solid base, expanding through France and beyond. 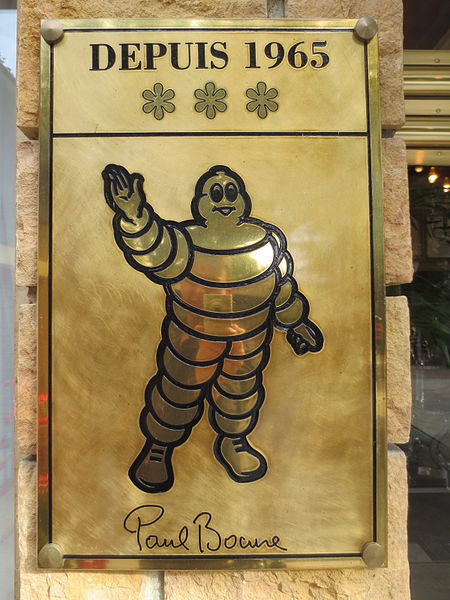 V – Paul Bocuse and his empire

The fame that followed this chef around led him to open restaurants all over the world. Paul Bocuse restaurants can be found in New York, Tokyo or as far as Disney World in Florida.

He doesn’t forget his dear region, however, as many “brasseries” (French restaurants) appear in Lyon such as the North, the East, the South and the West. There is even a somewhat “fast-food” version of these called the West Express.

This empire is now worth over 50 million euros.

There is even a competition today that lives on from his time, as Bocuse created the Bocuse d’Or. It is one of the most prestigious competitions on the French culinary scene. He actually called this contest the Nobel prize of Gastronomy.

All in all, we can certainly address a word of thanks to the man we now refer to as the Chef of the century, simply for his brilliance. And as Monsieur Paul used to say

“In order to double our happiness, we must simply share it”. 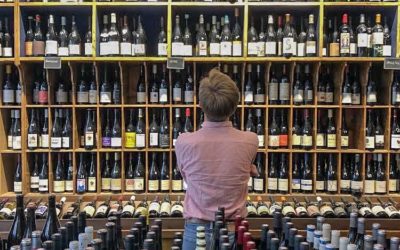 Bordeaux, Savoy, Rhône, Burgundy or Alsace… all are inimitable and incomparable wine regions. France is blessed with a mosaic of complex and fine terroirs which produce a wide range of contrasting wines.  In an attempt to fully grasp the variety and potential of the... 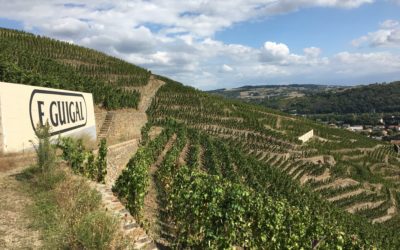 The great vintages of the Rhône valley

Today we’re taking you on a discovery tour of the grand wines produced in the Rhone valley. Our stroll though the vines will introduce you to both the northern section between Vienna and Valence and the southern wine-growing area between Montélimar and Avignon. Both... 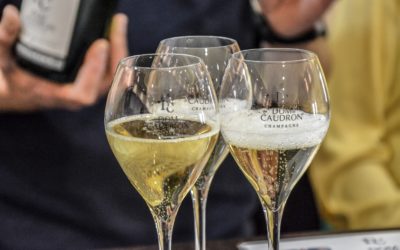 Champagne, a wine to celebrate!

Christmas time is often associated to champagne. The joy and celebrations, but also the foods which match perfectly with this wine. (Champagne is indeed a wine). The process of making it, however, is rather elaborate and relies on a technique known to few. The aim of...